What is the International Political System?

The international political system is a forum for relations between countries.  Those relations tend to centre around economics, human rights, and matters of diplomacy.  Yet, the international system is  unique because it does have a government ruling over it.  This means that countries have relative autonomy and free reign to act as they see fit and to exercise their sovereignty in ways that suit them best.  Sovereignty refers to the independent right of each nation to make decisions without other countries infringing upon them.  The issue with sovereignty is that it limits the ability of international organizations, like the United Nations, to pass concrete legislation.  For example, the United Nations General Assembly is a forum within which participating nations can debate pressing issues and propose solutions to them.  However, even when countries accept the proposed solutions, they are not legally-binding.https://mcgill.on.worldcat.org/oclc/7831188510

A photo of the General Assembly in session. https://www.cfr.org/backgrounder/role-un-general-assembly

History of the System: How it Formed

Countries have been trading and engaging in diplomatic matters for centuries, but the international system per say emerged more concretely in the late 1400s and into the 1600s, as European explorers set out to discover Asia and eventually landed in the Americas, colonizing indigenous populations throughout these regions.  When European travellers arrived in the Americas, they initially made contact with Native tribes and set up trading posts that gradually saw Indigenous populations weened out and metropolises forming.  Meanwhile, in Asia, Europeans, and eventually Americans, sought to colonize the rich lands now known as China, Japan, and Korea, among others.  In a series of unequal treaties with established governments in these parts, a series of bloody wars saw the independence of many nations from European colonial and imperial strongholds across Asia, by the end of the Second World War.

A map of the initial explorations of the European explorers. Spain and Portugal led the initial conquests of the 1500s, but Britain and France eventually surpassed them in military power and colonized more lands for themselves. https://www.worldatlas.com/articles/what-was-the-age-of-exploration-or-the-age-of-discovery.html

The end of WWII (1939-45) also saw a shift in power from the United Kingdom to the United States.  Throughout the 1700s and until the break of war, Britain was the most powerful country in the world, both economically and militarily.  Thanks to its advantageous geographical location, England was well-situated to mine coal that came to power factories.  As Britain had never had an advantage in producing agricultural goods, since it had fickle weather and generally poor soil for farming, it took advantage of its lead in industrialization and became a major manufacturer.  For centuries, the Brits dominated the new capitalist system, trading their manufactured goods in exchange for agricultural goods.

A map of the British Empire of the 19th century. https://chnm.gmu.edu/wwh/modules/lesson8/lesson8.php?s=0

A sketch of the Industrial Revolution underway in Britain, beginning as early as 1600. http://foundations.uwgb.org/cause-and-effect/

The international power yielded by Britain meant the British pound was the internationally-accepted currency, just as the US dollar is today.  This also meant that Britain was the global military leader.  With capital and a strong navy, they expanded their empire and ensured that no other country infringed upon their imperial interests.  Even so, with the rise of other European nations, and with the rapid industrialization of America by 1900, Britain’s global hegemony was increasingly challenged.  Come WWII, the British economy was in shambles, the manufacturing industry was hard hit, having had to transition to producing goods for the war effort, and its population was completely spent.  Meanwhile, though Americans had suffered during the Depression years of the 20s and no doubt played their part in the war effort, their manufacturing industry prevailed.  More than that, Americans never experienced fighting on their soil, which meant that, unlike in Britain, money and time did not have to be spent on rebuilding the nation or, for that matter, the morale of the people. 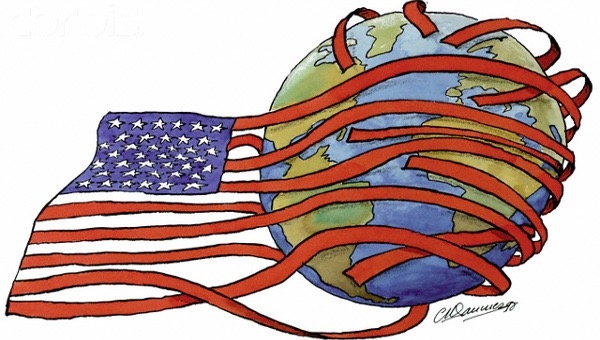 An animation depicting the transfer of power that occurred after WWII, as America became the new global hegemon, thereby replacing Britain as a global superpower. https://www.quora.com/To-what-extent-is-hegemonic-power-important-for-creation-and-maintenance-of-global-order-and-international-economic-cooperation

At the Bretton Woods Conference in 1944, global leaders set a precedent for the post-war years.  Being capital-endowed, well-developed, and allies from Malaysia to South Korea, the US was in the best position to make a claim to power and officially usurp the Brits.  The conference set the new official international currency as the US dollar.  With the approval of several economic agreements, the US was clearly the new global leader and has retained this position of power ever since.

A photo from the Bretton Woods conference. https://www.federalreservehistory.org/essays/bretton-woods-created

The Bretton Woods system officially saw the end of the Gold Standard. The Gold Standard was a system in which all metal currencies were pegged at the price of gold. While the British pound had eventually become the formal international currency, gold was often used as medium of exchange nonetheless, especially after WWI when the pound suffered significant hits. Yet, by 1944, it was clear that all currencies would officially be pegged at the price of the US dollar and no longer that of gold, or the pound, for that matter. https://www.usmoneyreserve.com/blog/rise-and-fall-gold-standard/

The theory of structural realism in politics refers to the idea that international relations function at the international level.  Put differently, whatever happens within countries is a product of what happens between countries, internationally.  In other words, structural realists assert that the ways in which countries interact with one another directly impact how they behave domestically.  This means that the roles that countries play economically, militarily, and diplomatically on the global scale, influences the types of national laws and jurisidictions that countries pass. https://oxfordre.com/internationalstudies/view/10.1093/acrefore/9780190846626.001.0001/acrefore-9780190846626-e-304#:~:text=Structural%20realism%2C%20or%20neorealism%2C%20is,important%20factor%20in%20international%20relations.&text=The%20anarchic%20ordering%20principle%20of,is%20no%20formal%20central%20authority.

A list of the key assumptions of the structural realistic approach to international relations.https://en.ppt-online.org/38669

A breakdown of the theory of structural realism. https://www.e-ir.info/2008/03/03/evil-human-nature-as-a-necessary-assumption-of-neorealist-view-on-international-politics/

A breakdown of Waltz’s approach to structural realism. https://www.scirp.org/journal/paperinformation.aspx?paperid=89895

Since Waltz asserted that the international system was anarchic, he assumed that countries vied for power above anything else, because with power, came economic and military might.  He therefore contended that the system could eventually reach a balanced state in which one country achieved power over the system and established a roster of allies strong enough to defend against adversaries, but not so strong as to band together and usurp its power.  For example, during the infamous US-Soviet Cold War (c.1960-c.1990), structural realists like Waltz asserted that the US and the Soviet Union were both vying to be the global hegemonic power.  With the eventual victory of the US, the Soviet Union retreated, with some of its allies jumping the fence in support of the new US global leadership.

An animation of the contest between the US and the Soviet Union throughout the late 1900s. https://knowledge.wharton.upenn.edu/article/new-cold-war-u-s-china-lose/

The game of balancing power at the structural level works well for interpreting how countries interact and why some countries are stronger than others.  More recently, the question of the US’s global decline has sparked suspicions that China will be the next international hegemon.  Other theories expand the new hegemon to a group of countries known as ‘BRICS,’ which includes China, Brazil, India, Russia, and South Africa.  Theorists assume that these countries are going to become so rich, developed enough, and endowed with natural resources that they are bound to overcome US global hegemonic power and reaffirm a new world order

An animation of China as the new global hegemon. https://foreignpolicy.com/2019/10/12/american-values-survive-chinese-world-xi-jinping/

A graph of the expenditures on military and nuclear efforts, with China ranking number one. https://www.defensepriorities.org/explainers/responsibly-competing-with-china

A graph of the current allies and adversaries of China, including countries that have as yet declared an official stance in either support or condemnation of the state. https://www.nytimes.com/interactive/2018/03/09/world/asia/china-us-asia-rivalry.html

The BRICS leaders in conference. They often make public appearances in solidarity against the West, and especially against the US, who they accuse of infrining upon other nations’ sovereignty and acting with supposed imperialist ulterior motives. https://www.dw.com/en/have-the-brics-hit-a-wall/a-51182058

Neoliberalism and the Domestic Level Perspective

Opposing structural realists are neo/analytical liberals, who advocate for free trade, liberalization, modernization, and industrialization, but who also tend to comment on the influence of domestic actors on a country’s legislation and actions.  Liberal theorists argue that structural realists are too reductionist and fail to account for the ways in which influential actors within nations can motivate leaders to behave in certain ways at the global level.  https://oxfordre.com/politics/view/10.1093/acrefore/9780190228637.001.0001/acrefore-9780190228637-e-550

key assumptions to the liberalist theory in politics and international relations. https://slideplayer.com/slide/12545655/

Analytical liberal theorists contend that the actions and behaviours of actors at the domestic level, meaning those within individual nations, have a direct influence on a country’s actions and behaviours internationally.  For instance, while a structural realist would argue that the US engaged in the Cold War with the Soviet Union because it wanted to retain its role as the global economic and military superpower, analytical iberals might argue that this is too simple an explannation and it does not capture the nuances of US actions.  In fact, they might note that the Roosevelt’s had interests expanding their family’s business, that big corporations wanted to retain their control over the international currency, and so on.  In other words, analytical liberals argue that  influential actors influence policy decisions in ways that should not be ignored.

Analytical liberalism has progressed into neoliberalism. The above description describes neoliberalism, but note that it depicts it with a biased tone.

Key influential factors at the domestic level of liberal analysis in politics and international relations.https://www.slideshare.net/SheikhAbirAhmed/levels-of-analysis-72550523

For instance, in 1911, US President Howard Taft approved a reciprocity treaty with the US, in which key agricultural and manufactured goods would be exchanged between the US and Canada without duties.  However, this deal would have harmed most producers, given that Canadian and American corporations produced much of the same goods.  The question then became why Taft would have approved of the deal if most Americans did not want freer trade with Canada.  For analytical liberalists, the answer is simple: a powerful lobbying group of steel producers had enough lobbying power in Congress to sway the vote in favour of the deal. 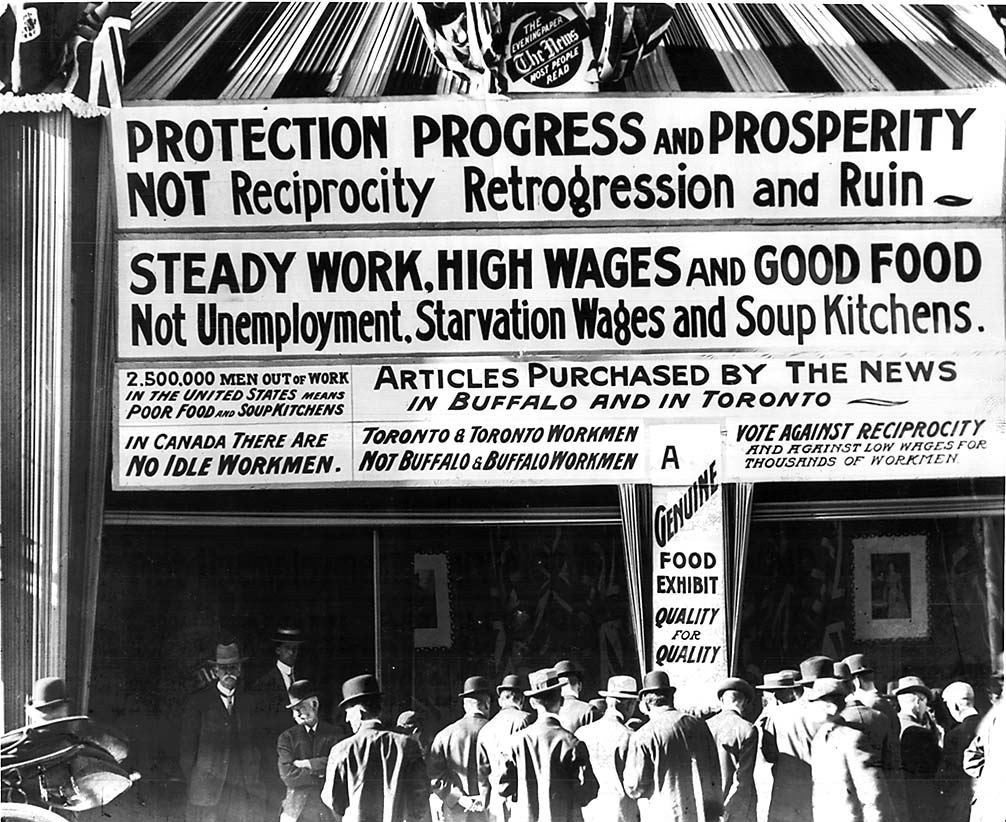 An advertisement expressing concern about the proposed, but failed, Reciprocity Agreement of 1911. https://commons.wikimedia.org/wiki/File:Anti-reciprocity_signs_1911_Toronto.jpg

The aforementioned example shows how groups of individual actors can impact legislation in ways that have global repercussions.  In this case, Canada ended up rejecting the deal, which meant the two countries did not engage in free trade until decades later.  But more broadly, the willingness of the US government to concede to freer trade signalled its growing desire for an open market and its turn away from the isolationism and protectionism it had previously relied on.

A sketch of one of the American US Steel company’s factories. http://www.nationalmaterial.com/brief-history-american-steel-industry/

A breakdown of how protectionism works. Highly protectionist countries tend to be ‘isolationist,’ meaning they refrain from international relations and economic incentives as much as possible to focus more on domestic affairs and to manage them without external interference. https://environmental-conscience.com/protectionism-pros-cons/

Analytical liberal theorists observe freer trade and open markets as a symbol of globalization.  They believe countries can only truly develop industrially through open markets on a global scale.  Even so, many liberally-oriented politicians continue to prioritize protectionist policies that protect certain industries through tariffs and duties because they prioritize the health of their domestic economies over that of the global market.

A breakdown of the contrasts between free trade and protectionism.https://slideplayer.com/slide/16861571/

Understanding and interpreting the world order is becoming increasingly important.  As American global power seems to be declining, countries in Eastern Europe are becoming increasingly protectionist, countries across the world are turning to far-right politics and populism, and China continues to grow in economic and military might, we must be aware of how our world is changing. The future remains unclear, but it is almost certain to be one of hardship for many if countries continue to come into conflict, thereby failing to combat global issues like climate change, poverty, disease, and violence.

Through unity our international relations can be strengthened to promote peace over war. https://bahaiteachings.org/unity-diversity-racial-identification/