Would you like to travel this year? If you say yes, I will show you some places around Brazil that you have probably never heard of.

Why did you choose Brazil? In 2016, the country hosted the Olympic Games, showcasing the carnival and the country’s distinctive culture. It’s also where music videos and TV series like Sense 8, CSI Miami, The Simpsons, and Tarzan were filmed.

Check out these five places if you want to get away from the crowd when in Brazil.

If you want to hike in the mountains

Domingos Martins is part of the Capixabas Mountain region, surrounded by beautiful upland scenery with a mild climate.

Italians, including Germans, colonized the area, offering excellent cuisine but a local twist.

The place is perfect for those looking for fresh air, clear waterfalls, hiking, and getting to know small local producers who sell cheeses, coffees, and liquors produced there.

You need to reserve a day to visit the Pedra Azul State Park, a unique rock that stands out among other mountains around the world.

Domingos Martins is a municipality in the Brazilian state of Espírito Santo (southeastern Brazil). The city’s main office, also known as Campinho, is located approximately 42 kilometers from Vitória (the capital), with direct access via the BR 262 highway.

It is situated in the Espirito Santo mountain range and is known as the “Green City” due to the Atlantic Forest Biodiversity.

What to see on Sunday in Domingo Martins?

At the entrance to the city, you can already see the European architecture with this portico that opened in 1992.

The Culture House, in the southwest region of Espírito Santo, shows the history of immigration with a collection of pieces brought by the first German families over 160 years ago.

The architecture is from 1915 and was originally used as a residence.

In 1983, the building was transformed into the Domingos Martins Culture House, the first Culture House in Espírito Santo.

There are photographs, furniture, telephones, typewriters, and other objects that belonged to the first immigrants in the museum.

If you want to swim in the lagoon

Have you ever heard of Nobres? The small district of Mato Grosso, about 150 km from Cuiabá, keeps one of the best-preserved secrets in the Midwest region of Brazil. An untouchable paradise with rivers of clear water.

What to see in Nobres?

If you ever thought about diving close to the fish in crystal clear waters with shades of color that remember the blue lagoon, Enchanted Aquarium will give you the chance to do that and much more.

This natural aquarium is hidden among trees, with blue waters and a great diversity of fish. You can observe the beauty hidden underwater.

In the huge natural aquarium, you can participate in many activities and have a nice day to treat yourself.

If you like adventure, it is possible to float in the waters and let the river current take you across the other side of the Salobra River.

The Floating on this river is one of Nobres’ most unmissable tours, which takes place on a one-kilometer stretch on the Rio Triste, located in the neighboring municipality, Rosário Oeste. To take the tour, it is necessary to hire a guide and a tour package that already includes a life jacket, mask with snorkel, and appropriate sandals.

Rio Triste (sad river) has a bluish hue and extremely transparent water, so it is forbidden to step on the bottom, use repellent and sunscreen. Everything to keep the waters crystal clear and preserve the nature of the place.

If you want to explore the National Park

The Chapada das Mesas National Park is located in southern Brazil (Maranhão) and is a real adventure for those seeking contact with nature.

Carolina is a city that you can use as a base to make your tours around the region, either by yourself or with a guide.

What to see in Maranhão

House of Maranhão is a Folklore Museum located in the city of São Luís.

Opened in 2002, the cultural center was launched to be a showcase of Maranhão’s culture. Located in the city’s historic center, it is possible to see exhibitions about legends, tiles, boats, traditional dances, gastronomy, and religious festivals. In addition, it shows historical facts, such as the attempt to set up Equinocial France.

Maranhão House is a perfect introduction to the richness of folklore and popular culture in Maranhão.

Taking advantage of the ample space, Maranhão House exhibits large-scale works and installations with a powerful visual effect. Among them, a magnificent giant ox.

Opened in 1817, the Arthur Azevedo Theater is one of the oldest theaters in Brazil

The Arthur Azevedo Theater was built with the richness of the Maranhão cotton cycle. The theater founders were Portuguese traders, who first gave the name Teatro União to celebrate the relationship between Portugal and the Portuguese colony. The theater would only be named after the writer from Maranhão, Arthur Azevedo, in 1921.

The theater was not always called Arthur Azevedo.

The building was inaugurated in 1817, first being called Teatro União, a tribute to the elevation of Brazil to the United Kingdom to Portugal and the Algarve, which occurred two years earlier.

In 1841, after a bad administration, the theater closed its doors, being reopened 11 years later, in 1852, with the name Teatro São Luís.

The journalist was responsible for literary publications such as A Gazetinha, Vida Moderna, and O Álbum. In addition to collaborating on A Estação, alongside Machado de Assis (a famous Brazilian author).

The Theater has 756 seats, which is a lot of people, right? These people are divided into four groups: gallery, box, audience, and frieze.‘Catirina’ was the longest-running show at the theater produced by the philanthropic group Ópera Brasil. The production of Catirina was transformed into a popular opera that took to the stage different rhythms of Bumba-meu-boi. There were about 250 presentations.

If you want to hit the trail

Aparados da Serra is a region between Rio Grande do Sul and Santa Catarina that comprises different cities with a European field and has canyons with incredible views, surrounded by Atlantic forest.

Cambará do Sul (Rio Grande do Sul) is at the top of the mountain and is one of the cities to use as a base to explore the National Park, but there are several other smaller alternatives nearby, with the same cold and foggy climate of the region.

It is also possible to stay at the foot of the mountain in Praia Grande (Santa Catarina), where several trails depart through the interior of the canyons.

Places to visit in Rio Grande do Sul

Colonized by Italians, Bento Gonçalves preserves all the European country’s charm, tradition, cuisine, and architecture. The city is full of landscapes reminiscent of the Tuscan region. Without a doubt, you must include it in your itinerary of cities in Rio Grande do Sul to travel.

Known for its wineries, artisanal production, and charming stone houses are present in the “Caminhos de Pedra” itinerary. This Bento Gonçalves route is 12 km long and has been qualified as a living museum to preserve material and immaterial historical heritage.

Três Coroas is a city that is located on the border with the Serra Gaúcha region. The municipality of Rio Grande do Sul, with around 25 thousand inhabitants, stands out for its historical constructions. Over the mountains of the Paranhama Valley, there is a Tibetan Buddhist temple in South America, including Tibetans living in its surroundings.

The main building is a replica of the temple of Guru Rinpoche, the great enlightened master who brought Vajraian Buddhism to Tibet in the 8th century. Visitation is free and open from Wednesday to Sunday. The public can walk through the beautiful gardens, participate in retreats, and, of course, learn about Buddhist teachings while on this tour. Três Coroas is one of the remarkable cities to visit in Rio Grande do Sul.

Alter do Chão, Located in Pará

If you want to hit the beach

Surrounded by the Amazon Rainforest and freshwater beaches, Alter do Chão is a destination already known in the north of the country but not well known to people from other parts of Brazil.

It is a small, quiet place, excellent to rest and recharge your batteries on its many peaceful beaches. You can rely on the weather to provide sunny days to explore the region.

Places to visit while you are in Pará

Erected in 1909 on the site where the Saint’s image was found, the Basilica Santuário de Nossa Senhora de Nazaré today is one of the most important and sacred places for the people of Pará.

The temple opened in 1923 and the only sanctuary in the Amazon, which today houses the original image found in the early 18th century. During the Círio festivities, the Saint receives a new mantle and descends from the main altar (called Gloria) so that the faithful can appreciate it more closely. 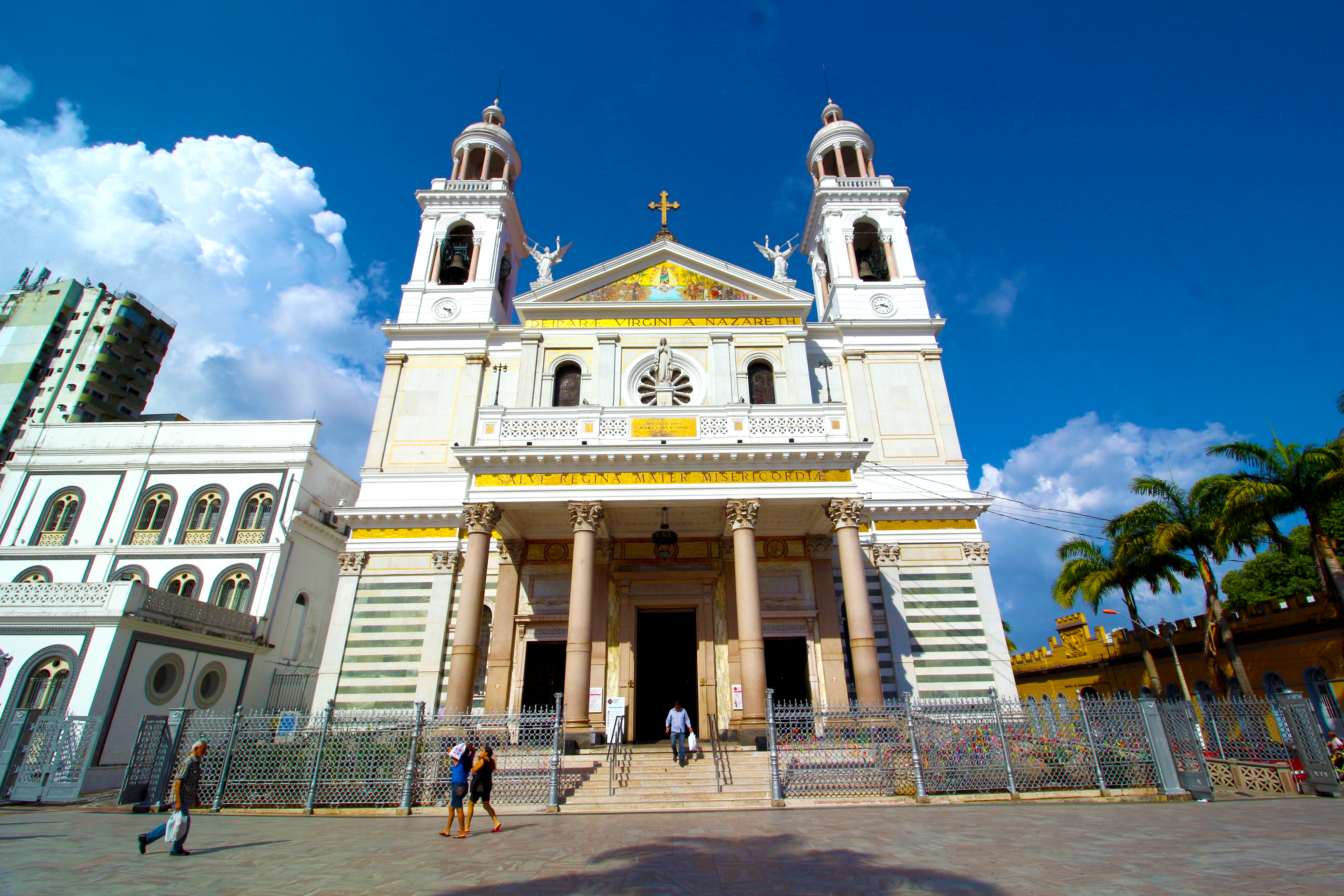 Located in the Metropolitan Region of Belém, State of Pará, Brazil, the Utinga State Park is the symbolic unit of biological diversity present in the Amazon Region.

The environmental park draws attention for its vast and peculiar biodiversity.

It represents one of the most threatened regions of the Legal Amazon due to the dynamics of advancement and consolidation of the second-largest urban area in the country’s Northern Region.

The historic function of providing, treating, and supplying 70% of the population of the Metropolitan Region of Belém, the Utinga State Park, was chosen by the population as the primary option for a program of recreation and healthy outdoor activities, combining well-being and contact practices with nature.

Important information due to Covid-19

Practically everybody. Brazil’s authorities have been notably relaxed about the pandemic-which includes border control. After a brief closure in 2020, the borders are open now, for almost all tourists, for stays of up to 90 days.

What are the restrictions?

All arrivals must show a negative PCR test performed within 72 hours.

Don’t forget to check your embassy website before your trip to ensure you can return home with incovenience.

2 thoughts on “Travel Guide: The Best Places to See for an “Off the Beaten Track” Experience in Brazil”

I am a Brazilian who is living overseas. I have a background in journalism and marketing. I am from Rio de Janeiro, one of the hottest places in Brazil. I love getting to know new cultures and places. View all posts by Lucas Costa e Silva