Nestled in Quebec’s southwestern region, Montréal is not only one of Canada’s largest cities, but also one of its most dynamic. Aside from Paris, Montréal is the second largest French speaking city throughout the entire globe. With an expanding population of over 1.7 million people, a range of prominent seasons, and a unique cultural background, Montréal is rightfully considered one of Canada’s best cities for partying, exploration, and travel. Montréal is a dear city to me, as I spent a month of winter 2017 in the household of native residents, as part of a cultural exchange. Not only was this experience rewarding in how it offered personal growth, but additionally it broadened my understanding of other cultures. Through my research and time spent within Montréal, I was able to grasp the rich history, ripe culture, and overzealous pride that the city labours. Every consistent traveller should visit Montréal!

For centuries upon centuries, Montréal was inhabited by various groupings of people: initially the Algonquins, Huron, and Iroquois. However, it took hundreds of years for further progression and colonization, before it could be incorporated as a city within 1832. At this point in time, there were only around 27,000 inhabitants, compared to the over 1.7 million people living there today. Time only improved the range of activity in Montréal; 1967 brought the world exposition, an endeavour that cost the country collectively $283 million to run. The 1976 Olympics occurred years after, bringing in another significant wave of tourism. Even if you are unfamiliar with Quebec customs, there is a very probable chance you have heard of “Cirque Du Soleil.” Birthed in 1984, it is one of Montréal’s greatest treasures. Cirque’s collection of modern street performances and circus acts is now one of the most celebrated groups in the world.

Walking through Montréal is a cultural introspection. Each road leads to a new adventure, a new lens of seeing this society. For years, groupings in Montréal have shared this similar feeling that Quebec as a whole should disassociate from Canada. The Bloc Quebecois is a political party that was founded in 1991, with the drive to individualize Quebec, and pull apart from the majority of nation. Quebec already feels quite sequestered from the majority of the country, for a plethora of reasons. Of course, the most prominent difference being the primary language spoken. This was an aspect of Montréal that became apparent fairly quickly. Everyone that I interacted with was bilingual to some extent, speaking fluently in both French and English. This made my stay not as nerve-racking. I was provided with excellent support regarding verbal communication and did not feel as though I would have to use the limited French I’d previously been studying.Visitors to Quebec should not fret over the language difference!

My Montréal visit occurred in late January, right in the middle of winter. Montréal is known for its intense winter season, with an average snow fall of 51.46cm in January. The temperature also drops quite significantly, with a January average of -14C and record lows of -36C, not including the influence of wind. Knowing this ahead of time was vital for planning, so I was prepared with multiple layers and jackets. When travelling to Montréal or any new destination for that matter, research thoroughly what the weather will be like! Peers travelling alongside me did not take the same precautions and were caught on -20C days in a thin sweatshirt and slip shoes!

My first night in Montréal, I arrived late. With the time change from my hometown, I felt a bit discombobulated and frankly, exhausted. My host family was firm that I was to make the most of my time, and we went to Parc Lafontaine straight from the airport. This ice-skating rink was located in Le Plateau Mont-Royal and was exceptionally busy for the time of night. As we skated around, underneath glowing-coloured lights and against the chilling winter air, the conversations around us were a hybrid of French and English language. With most schooling in the area implementing intensive English studies, this was no surprise. However, in a dual language country, it seemed peculiar that my own province did not show the French language the same respect.

Skating was a very reoccurring winter activity throughout my stay. It was inexpensive, easy, and entertaining. Skating at the various rinks through Montréal became a very efficient way to meet new people and true residents of the city. Montréal hosted opportunities for the various other winter sports, such as snow shoeing, skiing, snowboarding, tobogganing, or hockey. A personal favourite was tubing, at the slope upon Mount Royal. In 1876, the “Parc du Mont-Royal” was inaugurated and remains one of Montréal’s most naturally beautiful tourist destinations. Today, you will find it blooming and green within summer months, and a winter wonderland for tourists and residents alike the rest of the year.

On the topic of winters in Quebec, La Carnaval must be mentioned. This famous winter festival takes place annually, led by the loveable and friendly snowman mascot, Bonhomme. Dates of this experience began as early as 1894, still it became an annual tradition in 1955.  In actuality, this celebration occurs not in Montréal, rather in Quebec City. This is a two and a half hour commute out of the way. I made the trip to this world-renowned showcase and was underwhelmed by the attractions themselves; they seemed no different from a travelling carnival, with a few children’s rides and multiple selling stands. However, the truest amazement was the collection of glorious ice sculptures. This was an immense highlight, and the ability to explore these structures all throughout Carnaval was amazing. Quebec City is also home to the famous “Hôtel de Glace,” North America’s only ice hotel. As you visit Montréal, you may also want to explore elsewhere in Quebec!

On your Montréal visit, you will feel the eruption of culture as you explore the city further. Just as any other established destination, Montréal has delicacies that are far more decadent than anywhere else. Primarily, the dish of poutine.  My host family made sure to take care of me, and insisted we try poutine as much as possible. There were two kinds of poutine I encountered in my days; the first was reminiscent to one I had sampled prior, consisting of traditional French fry sticks, a generous helping of gravy, and pieces of cheese curd. While this was an amplified and exquisite version of poutine that I wholeheartedly enjoyed, my host family ensured me that more was to come. I experienced poutine in a formal dining setting. This time, there were potatoes roasted to perfection, topped with the finest curd of cheese, and slathered in thick, savoury gravy. It was such an exquisite meal, that I am often wistful for it. Another Montréal favourite would easily have to be smoked meat. Montréal smoked meat is sold just about everywhere and sought after by residents of the city. While I did not try this dish, I was surely able to smell it everywhere.

On the sweeter side of the palate, I fell victim to the maple syrup trope. Even being resident of Canada, with access to the delicious, local good within my hometown, the marketing of maple syrup in Montréal was so unbelievably convenient I couldn’t help but buy it. Maple syrup is sweet and alluringly thick, making it comforting and homely during the harsh winter. The snow severity was so dear during my months of travels, that some afternoons we were snowed into boredom. My host parents collected snow, that we later were made to pack down firmly into baking pans. From there, we simmered maple syrup on the stove and ultimately poured the concoction onto the snow. Miraculously, the mixture became a variation of a taffy, by hardening into an altered state. It was the most delicious snow day treat and I craved it for weeks afterwards.

My host family acted as tour guides to me, showcasing all the tourist destinations and trying to make my stay as pleasurable as possible. The city of Montréal was explained to me as consisting of two distinct halves: Old Montréal and Downtown Montréal. The former, primarily known as Ville-Marie, had a rich history (hence its name,) dating back centuries. While in the 1900’s, it was the heart of the city. Now in the 21st century it is known as a purely historic piece of Montréal. It has been up-kept by residents, yearning to preserve the site and additionally all the history and culture within it. In Old Montréal, near the water is the Old Port of Montréal. Here, not only are there spectacular views of the Saint Laurent river, but also a unique place of attraction. Within this area there are tens of ways to spend your time; strolls, skating, Ferris wheel, zip-lines. There is an additional abundance of shops and vendors, as well as a wide variety of native treats and classic boardwalk eats. 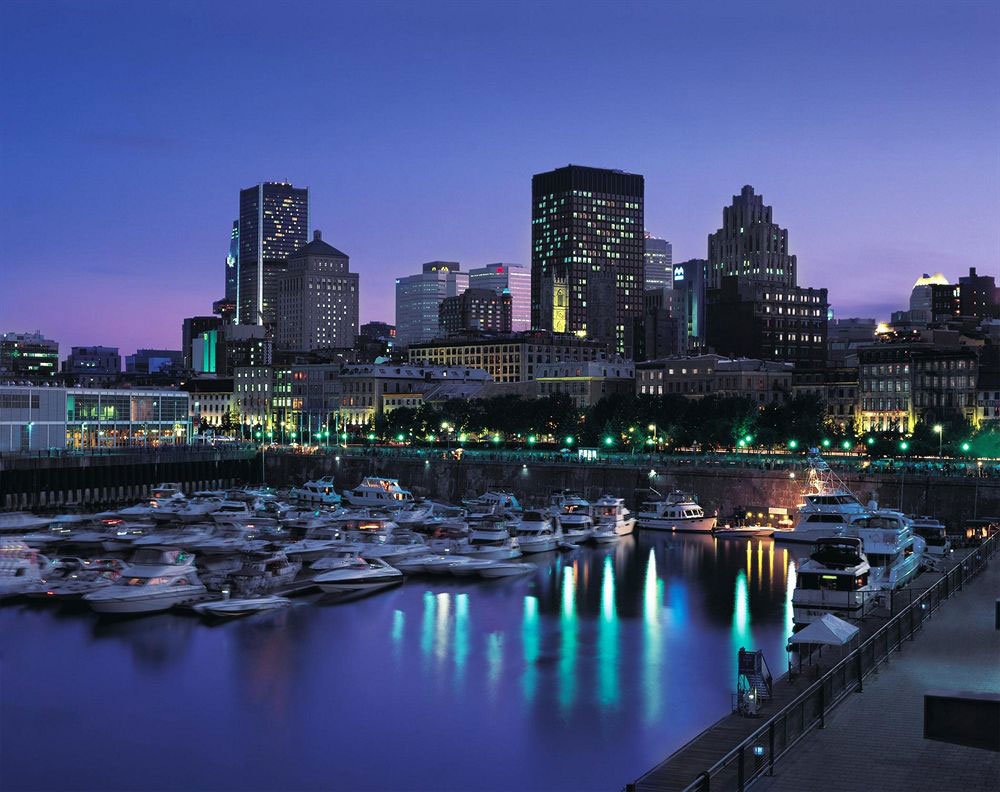 Visiting the exhibitions in the city are a must. One of my favourite excursions happened to be the gorgeous “Montréal Botanical Garden,” a beloved treasure. The beloved sanctuary of greenery was opened in 1931 and was still as incredible the day I visited it. A highlight would have to be the butterfly exhibit within the “Butterflies Go Free” event. As someone with a love of nature, plants, and animals, this was exquisite to view.  A unique exhibition I did not get to explore was the Barbie Expo. This speciality museum contains the most barbie dolls on display in the world. These barbies come from different countries, inspired by different designers, or are sponsored by specific brands. Such an interesting concept and immense collection, this experience will definitely enhance your trip!

On dull nights, we explored via long drives. It was on one of these drives that I first saw the Grand Roue de Montréal. Being the tallest Ferris wheel in Canada, it was quite extraordinary. Unfortunately, we were unable to ride it as it had not yet opened while I was on my trip. The Ferris wheel was built for the 375th anniversary of the city, and officially opened for public use on September 1st, 2017. Despite my chronic phobia of height, I longed to use the Ferris wheel. Hopefully you have the chance to ride it and see Montréal from a birds eye view. As I further visit Montreal in the future, I hope to have this privilege.

Montréal’s contemporary downtown segment, also known as Centre-Ville, houses a majority of city business and some very exhilarating tourist attractions or known establishments. For example, my housemate and best friend throughout the trip was striving to attend the established McGill school. McGill and Concordia are a duo of universities accessible in the downtown. Asides from there, Rue Ste.-Catherine is a shopping destination within downtown Montréal. This street is over 3km long and holds over 1200 businesses. It is a direct connection to other necessary stops in city, and a bustling environment to check out.

As mentioned, the winters in Montréal grow quite harsh. A viable solution to this was to form a community, entirely indoors. The “Underground City” was born in 1962 and one of it’s many access points is on Rue Ste.- Catherine. Truthfully, this space is just a shopping mall and train system located beneath the ground level and not a true attraction. Still, this extensive area is especially unique and exciting.

In this modern age, where travel is a far-fetched illusion for most, it can be hard to imagine ever feeling safe going on a trip. However, in a post pandemic idealistic world, you will want to plan a slot of time to visit Montréal. While you may not be in a position yet to book your ticket and go right this instant, you can still find online many more intriguing resources regarding Montréal. I certainly can not wait to return and hope you enjoy as you visit Montréal!

For More Reading to Visit Montréal: